My interest in photography began as an extension of early fellwalking and mountaineering pursuits in the Lakes and Dales. However, a move to Lytham around 2004 brought me into contact with the shrimprs and fishermen who worked on the River Ribble. It seemed important to try record what maybe the final days of shrimping in the nort west of England. A livelihood that had dwindled to the point where only three or four traditional shrimpers remained.

More recently I started visihting the Forest Of Bowland AONB. An area of moorland in the N.W. located close to where I had been brought up. Despite not being so well known as the neighbouring Lakes and Dales national parks, it possesses a unique beauty, and a history dating back to Norman times. The impact of which has shaped not only land ownership, but the environment we see today.

My interest in the human land relationship has become something of a theme and now extends to include another project photographing the UKs coast. Which by virtue of its geology and a history dating back to neolithic times, has blessed Britain with one of the most diverse coastlines in the world. A constant reminder of our nations timeless connection to the sea.

Background to  the portfolio

The U.K. landscape embodies a unique sense of history, one that can be traced back thousands of years.  Even today there remain visible artifacts, groundwork’s and monuments that have been created by generations of human endeavour .  There are few landscapes left in the UK that have not been impacted by humans. Areas that appear primeaval and natural have infact been shaped by farming and enclosure.  Even National Parks and perhaps more surprisingly our moorland areas owe much of their appearance to the activity of humans.

Seeing these impacts and the settings in which they are placed enable us to feel some connection to the past. One cant help think back to the lives of the people that created them, and  perhaps it is these ancient echos one feels and tries to capture.

This sense of history comes not just from the land but also from sea and the the people who work directly on it. Britains coast and rivers were the early highways and a key source of food . Whilst farming and fishing technolgy has changed, the fundamental connection remains. In some more remote parts of the country there are still smaller scale industries which offer a glimpse of what traditional working lives would have been like.

The Industrial Revolution had a massive impact on the landscape and environment, where the exploitation of people and natural resources fuelled a growing consumer society. This in turn heralded the advent of leisure time and travel for many thousands of people. Ironically this led to some ancient monuments becaming tourist attractions themselves. The combination of tourism and  rail travel changed settlement patterns encouraging the expansion of many small idyllic villages and towns. On a more positive note the creation of National Parks, Botanical gardens and AONB`s have been a huge success in preserving parts of the countries pristine and beautiful countryside fom commercial development.

Today we are picking up the environmental tab so to speak, and there is now a realisation that continuing demand for resources fuelled by population growth is driving extensive destruction of our landscape, not just here but all over the world.

Several projects are maintained concurrently  in the portfolio, that aim to  reflect the UK landscape its history and traditions..

The next exhibition at the Lytham Heritage Gallery will now be  23 August – 11 Sept 2022. Titled “Human Land” it will include new works from the U.K. coast and Northern England 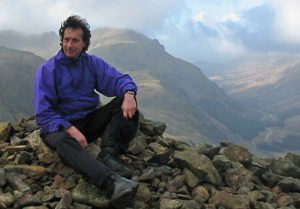 Winner of the Eltermere
Photographic Competition 2005